The Extinction Rebellion is here, along with the Sunrise Movement, >350SF, Diablo Rising Tide (DiRT), Codepink, the Climate Emergency Coalition and the Climate Reality Project. But my favorite group today is 1000 Grandmothers.

When some of the family asked her if she was worried about the ‘STOP Line 3’ demonstration I was attending, my wife calmed their concerns by telling them, “It’s organized by 1000 Grandmothers, how rough could it get?” 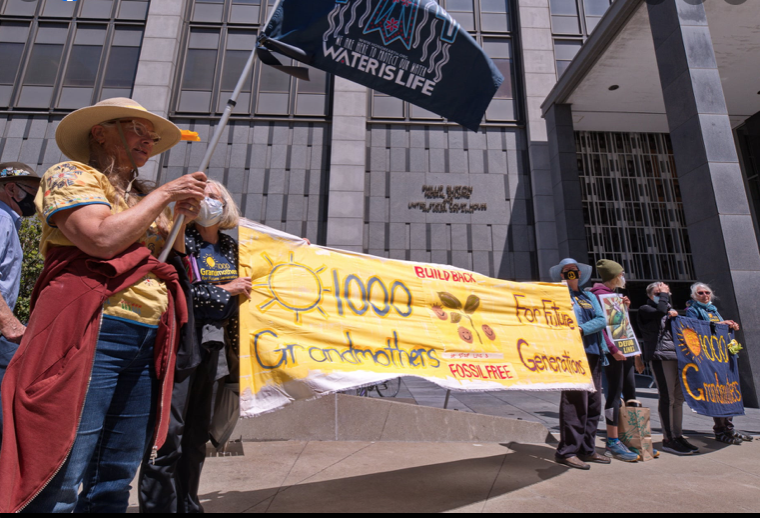 We gathered in the large plaza outside the twenty-one story Phillip Burton Federal Building in downtown San Francisco. Among the federal agencies inside: the FBI, the IRS, the U.S. Passport Agency and the U.S. Department of Justice Antitrust Division. But we aren’t here for any of those heavy hitters. We are here to demand that the U.S. Army Corps of Engineers rescind the permit for the Pipeline 3.

While a hundred or so of us rally outside with signs, chants and songs, a dozen climate warriors are upstairs occupying the lobby of the Army Corps of Engineers. Planning to stay until A.C.E. leaders are willing to hear them out, they risk arrest. They call themselves ‘Water Protectors’. 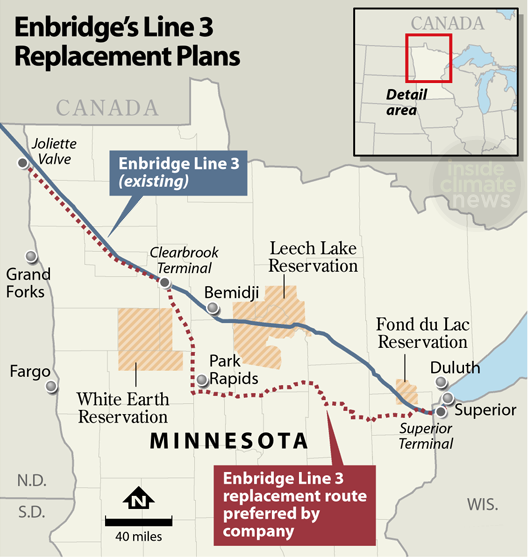 Line 3, which brings tar sands oil from Alberta Canada to Superior Wisconsin, crosses some 200 waterways, including the headwaters of the Mississippi River. Since 1968 when it was first built it has been a major leaker. It has spewed millions of gallons of crude oil into rivers, farms and forests, including a 1991 incident in Grand Rapids, MN in which 1.7 million gallons of crude oil spilled out into wetlands and into the headwaters of the Mississippi River — the worst inland oil spill in U.S. history.

We’re focused on the Army Corps of Engineers because of the immense power they have in granting or denying pipeline permits. They’ve been part of the U.S. military since the revolutionary war. But their job used to be about building bridges for troops to cross or levelling out islands for landing strips. But now they review any and all construction that impacts U.S. waterways – rivers, dams, canals and lakes.

Any pipeline that crosses a waterway must have a permit from the U.S. Army Corps of Engineers. And all oil pipelines cross waterways.

Enbridge, Inc., owners and operators of the Line 3 Pipeline, are trying to build a replacement so they can keep sending millions of barrels of oil from Canadian tar sands to the refineries in northern Wisconsin. The project is 60% complete.

Though he directed the Army Corps to rescind permits for the Keystone XL Pipeline, President Biden has been unwilling to stop Line 3.

“No more tar sands. No more pipelines. No more destruction of indigenous lands.” A fired up young Extinction Rebellion leader chants through her bullhorn. Arranged in a semi-circle in front of her, we pick-up her rhythm and volley the lines back and forth. Videographers swoop around the group trying to capture the energy, assistants beckoning some of us holding signs to move closer.

My friends from the Climate Reality Project gladly take turns holding up the STOP signs that I’ve altered to read ‘STOP Line 3’. We position ourselves on either side of two members of 1000 Grandmothers for Future Generations who hold up a six-foot wide hand-painted canvas banner proclaiming, ‘BIDEN – STOP LINE 3 NOW.’

Between the chants, we get live Facebook feeds from the team upstairs. The tech-savvy team orchestrating the rally have a smartphone jacked into a bike-mounted portable speaker, so we can all hear, “Three of our members are inside with the Army Corp while the rest of us wait in the hallway. Uniformed Homeland Security officers have just shown up with fistfuls of zip ties. We remain calm, non-threatening, not raising our voices. But we don’t know what’s going to happen next.”

When the feed cuts, the chant leader steps back in front of us, bullhorn aimed up at the offices above. She leads us again, “Army Corps – You can’t hide . . .”

But before I can pick-up the rest, my friend Lianne points out the arrival of SF Police at the edge of the plaza, only a few so we’re not worried, but it makes us even more anxious about our colleagues upstairs.

We understand that our modest protest today is in solidarity with the fight led by Native ‘Water Protectors’ in northern Minnesota who’ve been battling Enbridge security and local sheriffs for nine months as they protest the Line 3 construction project. No one brings the depth of their message home to us better than Patricia St. Onge, a robust leader of 1000 Grandmothers, who stands before us now.

Turning as she speaks, levelling her eyes are each one of us, St. Onge tells us, “I am Mohawk and we are proud protectors of Mother Earth . . . but it’s not that we Natives are cooler than those of you with European ancestors, we just didn’t lose touch with the earth, like many of you have.”

When I set out this morning, taking the N-Judah from Ocean Beach down to the Civic Center, I had no idea what to expect. Climate actions can be hit-and-miss. Lots of well-intended people rallying around a common cause, we’re almost entirely volunteers. Information on this morning’s protest was sketchy. With a bare minimum of details to offer them, I was reluctant to invite other people.

Thankfully, those who responded, Helena, Paul, Lianne and Mike, are experienced enough to go with the flow in supporting climate action organized by other groups.

No matter what is accomplished upstairs at the Army Corps of Engineers, this protest has already achieved something vital to our cause.

The energy of this morning’s rally and the sense of solidarity with each other, and with the thousands of climate action groups worldwide, is the fuel we need to carry on. I am a 70-year-old connecting with 20-year-olds. I am a white man connecting with Native Water Protectors. I am an activist with the Bay Area Chapter of the Climate Reality Project. And with the ghost of the pandemic still hanging over us, many of us have faded away from each other, a cluster of tiny images in zoom meetings.

If we don’t challenge every extension of our fossil-fuel culture, if we don’t protest every pipeline and decry every subsidy for oil and coal, if we don’t support every initiative for clean energy and promote every move toward mitigating the impact of climate change, if we don’t stand up for climate justice along with every group being robbed of clean air, clean water and livable land, we will fail.

The momentum of the rally kept us going for three hours, as we waited for the outcome.

Finally, Ralph King, one of the lead Water Projectors, emerges from the front doors of the Federal Building followed by his team. “We were cited for trespassing by Federal officers. But we were just given citations and were released. They looked at the group and said they didn’t feel a need to restrain us.”

He explains that the Stop Line 3 protest letter that they came to read to the Army Corp of Engineers will be sent to Washington, with a copy going directly to President Biden’s office.

Meanwhile, in Northern Minnesota where hundreds of Water Protectors have already been arrested, hundreds more defy the Enbridge construction crews, chaining themselves to bulldozers, cranes and the maniacal tree felling machines.

Just returning from Minnesota the next speaker says, “Where there was once pristine nature and untrampled woods, Enbridge trucks keep coming, knocking over trees, gouging out the earth.”

We feel the fear of the Ojibwe, the Chippewa and other northern Minnesota tribes seeing another threat to their homelands, to their fresh water and to their wild rice crops. And like the hundreds of climate activists from around the country that have joined their picket lines, we stand with them – even if we’re standing two thousand miles away in front of the Phillip Burton Federal Building in San Francisco.

And we know that Native Water Protectors stand alongside us. Like us, they know that Line 3, which will be capable of pumping a million barrels of oil a day, represents a country still committed to fossil fuel. Its completion will threaten tribal lands and will signal the Biden Administration’s willingness to compromise rather than address climate change like the emergency that it is.

As I walk back to Market Street to catch the N-Judah home, I am tired, dehydrated and badly in need of a bathroom. And I couldn’t be happier that I demonstrated today. I am a climate activist. And I am not alone. Patricia St. Onge’s words resonate within me, “We are fearless. We are strong. And we’re ready to carry on.” 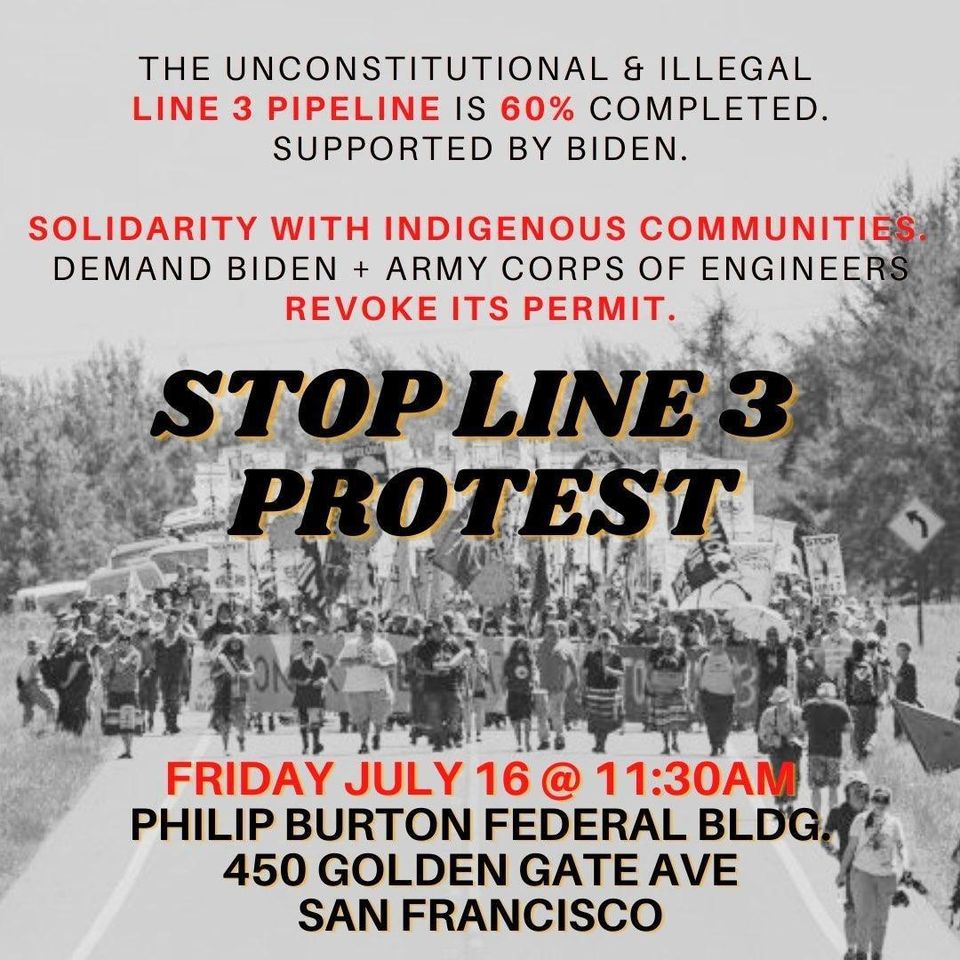 An online poetry journal for the world's most rejected works of literary genius.