Posted on August 7, 2019 by DaveRhodyWriting

Like anyone with growing absorption in a cause, my personal radar is on high alert for anyone purposely standing in the way of climate solutions. My optimistic view is that most ‘climate deniers’ are teachable – they need information presented in their language by people they trust. On Sunday (8/4/19), however, all the alarms went off – The New York Times ran an opinion piece that, in the face of a global emergency, was as irresponsible as someone purposely silencing the alarms in a burning building.

Free speech is essential to our democracy. But, when that speech is amplified by mass media, by The New York Times, it must have a filter. It must be responsible. This Op-ed by Christopher Caldwell was entitled –

“The Problem With Greta Thunberg’s Climate Activism
Her radical approach is at odds with democracy.”
NY Times Op-Ed Dismissing Thunberg

Reviewing the success Greta Thunberg has had in stirring Europe into climate action, Caldwell dismisses her adult-sized commitment. “Kids her age have not seen much of life,” he says.

The passionate crusader he’s referring to, a 16-year-old Swedish schoolgirl, has done more to inspire global climate action than anyone since the hard-fought battle for the 2016 Paris Agreement. In just one year she has spoken to climate rallies in Stockholm, Helsinki, Brussels, Paris and London. She has addressed the UN Secretary-General at the 24th Conference of the UN Climate Change Convention. She has addressed British Parliament and the EU Parliament and is on her way to New York right now for the 2019 UN Climate Action Summit. 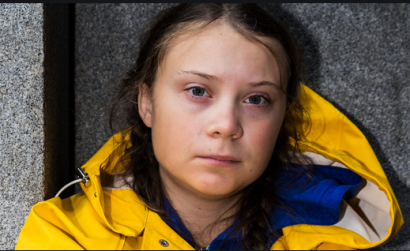 In January 2019 she was invited to the World Economic Forum in Davos where her speeches again made a worldwide impact. Greta Thunberg has accomplished all this since August 2018 when she began her school strike for climate – now a global movement called ‘Fridays For Future’ that has enlisted a million-and-a-half students worldwide.

To Caldwell she’s a kid who skips school and hands out flyers in front of the Sweden’s Parliament, “informing adults, in crude language, that she was doing this because they were ruining her future.”

He goes on to question the veracity of the 2018 UN IPCC Report (issued jointly by climate scientists from 120 countries), wondering how Thunberg could take this as the ‘bible truth.’ His final word is that climate change can wait, that anything less is undemocratic.

Sure, it’s an opinion piece. But, what the NY Times fails to clarify is that this particular opinion comes from a man who is a self-promoting neoconservatist. Christopher Caldwell was the Senior Editor of an American political magazine called The Weekly Standard – often referred to as “the neo-con bible.”

The Weekly Standard, originally funded by Rupert Murdoch, first gained notoriety for its campaign for the 2003 U.S. invasion of Iraq, claiming that Saddam Hussein and Osama bin Laden were collaborators. 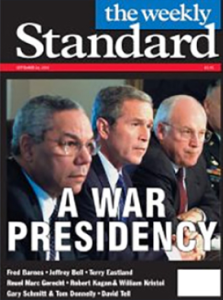 It has published dozens of articles ridiculing anyone who believes in climate change, including “Green Tyranny: Exposing the Totalitarian Roots of the Climate Industrial Complex.”

Caldwell is, and has long been, a virulent opponent of climate activists. But, The Times only provided the placid credential, “Mr. Caldwell is the author of Reflections on the Revolution in Europe: Immigration, Islam, and the West.” It was a set-up. They know that most people don’t look deeper into an author’s background. They knew that this op-ed would be taken seriously, as though written by a credible writer with a balanced opinion.

Switch this to another dire topic – say ‘world hunger’ – someone writing an opinion saying ‘hey, wait a second, before we start sending food, let’s wait and see what this is really all about.’ Would they be taken seriously? Would they be given an open forum in the New York Times?

The Climate Emergency is the single biggest threat humanity has ever faced. Discounting its urgency while discrediting a smart, committed 16-year-old schoolgirl is reprehensible.

Training with Al Gore at the Climate Reality Project is just the beginning of my new commitment to Climate Activism. My previous incarnation began in 1983 when, just for the hell of it, I ran from Los Angeles to San Francisco. That lone adventure opened a door that led to a thirty-two year commitment to RhodyCo Productions. We produced running and cycling events, big and small, in and around San Francisco, raising millions for Bay Area non-profits. '468 events - 1.5 million finishers' was our final tagline. But, writing has always been my first love. I've been a baker, a pizza maker, a business owner, a waiter, a social worker, a sex educator, strawberry picker, a seminarian, a race director and now a climate activist and a writer. My first novel 'Dakota White' (2007, iUniverse) is available on Amazon. Find me on QUORA, writing under my pen name, 'Abbey Rhodes'. Or on Twitter @DaveRhody
View all posts by DaveRhodyWriting →
This entry was posted in Climate Change and tagged #Climate Deniers, #Climate Emergency, #Climate Solutions, #Greta Thunberg, #New York Times, #UN IPCC, Climate Change. Bookmark the permalink.

Writing and reviews with an environmental, science fiction, and fantasy touch