Posted on March 27, 2022 by DaveRhodyWriting

“Every day the world burns 100 million barrels of oil, 47 billion pounds of coal and 10 billion cubic meters of natural gas (methane).” Plug those figures into your mind, translate them into annual global emissions and challenge yourself to imagine a future without fossil fuel pollution. It’s a mind-boggling task.

As the title of his latest book confirms, Paul Hawken is not dissuaded by the mind-boggling crisis we face. Regeneration: Ending the Climate Crisis in One Generation is a compendium of global solutions. It is a big, bold, confident book.

Instead of a barrage of alarming facts that many climate authors use to slap us across the face, trying to wake us up to the staggering reality of the crisis, Hawken balances the disheartening facts with an emphasis on the transformative processes that can rebalance nature and earth’s biosphere. He offers hope, a path forward.

Hawken calls for a worldwide expansion of marine life sanctuaries, supporting the life forms that will help restabilize oceans. He describes seaforestation programs that can, among other things, help save what’s left of the Great Barrier Reef which, in turn, will save thousands of life forms that live within it. He talks about mangrove forests which live at “the nexus of sea, soil, and sky” and that “remove up to four times more carbon from the atmosphere per acre than terrestrial forests.” 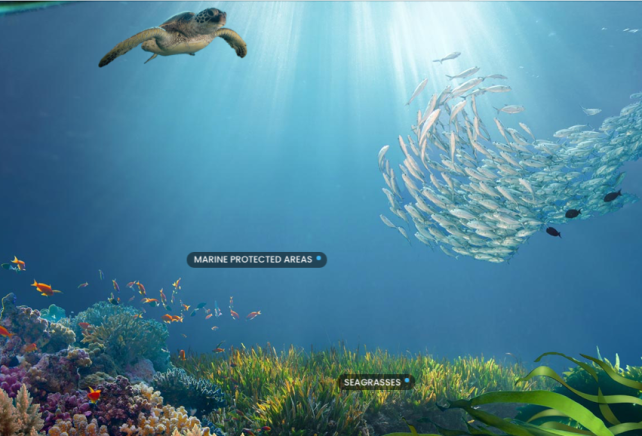 Tidal salt marshes, seagrasses, Azolla ferns, and kelp farms are all presented as both restorative to aquatic eco-systems and MVPs in sequestering greenhouse gases.

From ocean regeneration, he turns to land-based solutions.

We learn about the difference between reforestation, helping forests return, and afforestation, planting trees where there we none before, helping to hold back desertification. Both Africa and China are creating greenbelts by planting millions of trees to hold back expanding deserts accelerated by climate change.

Among the book’s many guest authors, Lyla June Johnston, a Diné (Navajo) author recounts her ancestors’ practices that helped shape forests into major sources of food. By planting crops that nurture it or culling a forest to make it healthier, eco-systems responded by generating nutritious foods for humans. “Humans are meant to be a keystone species,” she asserts. “A keystone species creates habitat and living conditions for other species.”

More than a textbook that could well be used for climate change classes, Regeneration brings us closer to nature by bringing us closer to the people whose lives are most disrupted by our extractive practices. Hawken introduces us to Nemonte Nenquimo, a leader of the Waorani, a tribe indigenous to Ecuador.

“My message to the western world – your civilization is killing life on Earth.” So begins Nenquimo’s letter “to all world leaders that share responsibility for plundering the planet.”

She continues, “It took us thousands of years to get to know the Amazon rainforest. To understand her ways, her secrets, to learn how to survive and thrive with her. And for my people, the Waorani, we have only known you for 70 years, but we are fast learners, and you are not as complex as the rainforest.”

She confronts the lies told by ‘cowori’ – that us, the outsiders. Oil spills downstream from the wells which they were told would ‘sip the oil like hummingbirds from a flower’ and the smoke choking her people as Amazon forest is burned down around them. Nenquimo, who Time named as one of the 100 most influential people in the world, concludes, “And so I say to all of you: the Earth does not expect you to save her, she expects you to respect her.”

Later, when Mimi Casteel reminds us of the noble labor of America’s farm workers, I see that they, like the Waorani, honor the land. But, instead of a time-honored relationship with ancient forests, theirs is with crop lands, vineyards and orchards.

To appreciate them is to understand that, “our lands turn on their affection”. Casteel not only practices regenerative agriculture on her farm, she speaks up for healthcare, job security and rightful compensation for her workers. She recognizes that their dignity offers hope for their future, as well as ours.

I draw hope, too, from learning about regenerative agriculture: farming practices that hold carbon in the land while increasing crop yields, the use of vermiculture to restore worn-out soils and new uses of biochar and compost as natural fertilizers.

Living, as I do, in drought-stricken California, I’m blown away when I read, “People can make rain, cool down the planet, rehydrate the land, and turn deserts green.”

That’s right, scientists have learned the natural bacterial components of rain. And now we know that by planting, or restoring, vegetation like sage we can stimulate the release of rainmaking bacteria. Using this and other newly-imagined means of managing water cycles and evaporation, Dutch Scientist Ties van der Hoeven plans to restore the upper half of the Sinai peninsula in Egypt.

Hawken paints a hopeful picture of earth’s regeneration. Some of that hope leaks out of the picture when confronted by the immense challenge we face. We must adopt the restorative practices he describes ASAP. But we need to cut our greenhouse gas emissions even faster.

While climate writers like Michael Mann, Naomi Klein and Katharine Hayhoe focus on clean energy solutions, carbon pricing and other emissions-reduction policies, Hawkin believes that whatever positive actions we take will begin to change people’s point-of-view. If we demonstrate a new relationship between humanity and nature with all the regenerative practices he describes, we will create a new set of beliefs that just might save us.

He argues in the opening chapter that, “The most complex, radical climate technologies on earth are the human heart, head and mind, not a solar panel.”

Winning over their hearts and minds is, he admits, no small task. He quotes Oliver Burkeman of The Guardian who wrote: “If a cabal of evil psychologists had gathered in secret undersea base to concoct a crisis humanity would be hopelessly ill-equipped to address, they couldn’t have done better than climate change.”

Our ineffectual response to the climate crisis is largely from a deficit of imagination. Consider another type of global crisis. Let’s say that thousands of scientists from around the world confirm that a giant meteor is going to smash into earth in exactly 400 days.

For whatever reason, we can’t seem to sustain our sense of urgency about the climate crisis. Even though we’re already feeling the impact, even though cities, states and countries around the world have passed Climate Emergency Resolutions, even though the UN IPCC issued a red alert last year, and UN Secretary General António Guterres spoke recently of an impending “atlas of human suffering”, we’re still acting like we have all the time in the world to solve this.

With his mission of hope, Hawken chooses not to be this blunt. He leaves that to articles like this, from the March 5th, 2022 issue of The Guardian: “Half of the world’s people are “highly vulnerable” to serious impacts from the climate crisis, a billion people in coastal areas face inundation, mass die-offs of species including trees and coral have already begun, and close to a tenth of the world’s farmland is set to become unsuitable for agriculture.”

Don’t get me wrong, Hawken is fully capable of scaring the crap out of us with projections for climate catastrophe. Admirably, he also stays on point with solutions, showing us what we can change and what we need to change.

He features a chapter by Jonathan Safran Foer on the problems with animal agriculture. Instead of screaming ‘The Cows are Killing Us’, it concludes with a simple bullet-point list that is no less alarming – here are some samples:

Hawkin does a similar treatment with insect extinction, quoting E.O. Wilson, the father of biodiversity, “Insects, the little things that run the world.” He notes that with 5.5 million insect species, they total 80% of all animal life.

He then expands on the intricate role insects play in our food web and on what Albert Einstein said nearly a century ago: “If the bee disappears from the surface of the Earth, man would have no more than four years left to live.”

Hawken is not afraid to dish the dirt when it comes to the institutions responsible for degraded environment. He slams his message home with chapters on the War Industry, the Political Industry, Big Oil, Big Ag, junkfood giants like Pepsi, and financial institutions that have invested a total of $3.8 trillion in fossil fuels since the signing of the Paris Climate Accord in 2015. But he delivers good news along with the bad and insight along with grim realities.

He notes that global investments will eventually shift to clean energy (emphasis on ‘eventually’) . While imaging what the world’s 164 standing armies and their $trillion budgets could do to help address the climate crisis, he also takes on what he calls ‘the upstream approach to world peace’ – let’s get rival countries to start asking, ‘why did we become enemies?’

We cannot end the climate crisis until we end global conflict, solve world hunger, rebuff institutional racism and centuries-old rivalries, empower women and until we radically changeour relationship to the natural world.

I agree with Paul Hawken and the dozens of notable authors who contributed to Regeneration. And I would love to see the climate crisis solved in one generation. We are talking, however, about the greatest paradigm shift in human history.

I love him for this. Hawken believes we can achieve this massive shift with a new narrative of hope and regeneration. 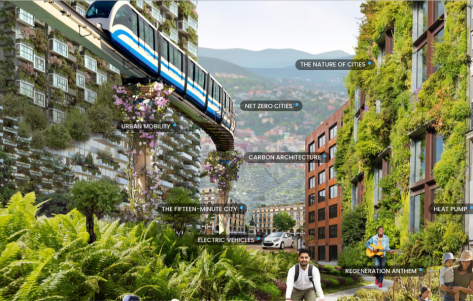 Imagine a future, he urges, where we’ve not only solved climate but where every individual is valued, where cities are emissions-free and growing half their own food, where quality-of-life is prized above quantity-of-cash, where we have an abiding respect for all life on earth. We can transform our planet. We can finally become the keystone species we were meant to be.

Training with Al Gore at the Climate Reality Project is just the beginning of my new commitment to Climate Activism. My previous incarnation began in 1983 when, just for the hell of it, I ran from Los Angeles to San Francisco. That lone adventure opened a door that led to a thirty-two year commitment to RhodyCo Productions. We produced running and cycling events, big and small, in and around San Francisco, raising millions for Bay Area non-profits. '468 events - 1.5 million finishers' was our final tagline. But, writing has always been my first love. I've been a baker, a pizza maker, a business owner, a waiter, a social worker, a sex educator, strawberry picker, a seminarian, a race director and now a climate activist and a writer. My first novel 'Dakota White' (2007, iUniverse) is available on Amazon. Find me on QUORA, writing under my pen name, 'Abbey Rhodes'. Or on Twitter @DaveRhody
View all posts by DaveRhodyWriting →
This entry was posted in Uncategorized and tagged #Climate Crisis, #Climate Solutions, #Katharine Hayhoe, #Michael E. Mann, #Naomi Klein, #Paul Hawken. Bookmark the permalink.

Coming in from the Cold

thinking politics through the power of nonviolence

An online poetry journal for the world's most rejected works of literary genius.